FISHING IN CABO SAN LUCAS, AT THE SOUTHERN TIP OF THE BAJA CALIFORNIA PENINSULA, IS SOME OF THE BEST FISHING IN THE WORLD. NUMEROUS SPECIES ARE AVAILABLE YEAR-ROUND, BUT CABO TOPS THE LIST, AND IS CONSIDERED BY MANY TO BE THE MARLIN CAPITAL OF THE WORLD!

Along with the fishing for the big game Billfish, there is fine fishing available for Yellowfin Tuna, Dorado, and Wahoo. Besides the offshore fishing there can be some great inshore fishing for Roosterfish, Grouper, and Snapper. And don’t forget the jigging for big Yellowtail, some of the finest eating fish in the world.

So get ready to have some fun, pick out the species you want to target and book your charter with Picante Sportfishing. We’ll make your fishing dreams come true.

If you’re heading down to Cabo for a Winter vacation, there will be plenty of options when it comes to sportfishing. January is an excellent time for Striped Marlin, Yellowfin Tuna, Mackerel, and Mako Shark. You’ll also see a good number of Dorado and Wahoo. We see high numbers of Striped Marlin throughout this month, which makes it a great time to go fishing in Cabo San Lucas. The weather is as good as any time, with a forecast of dry and mild.

February introduces some inshore fishing into the mix, with Snapper and Grouper becoming available. We’ll also see Swordfish pick up during this month, as well as the continuation of excellent Striped Marlin, Mackerel, and Mako Shark. Wahoo fishing is still good, and Dorado and Yellowfin fishing is fair. February is a great time for fishing in Cabo San Lucas, thanks to a growing variety, and consistently excellent Striped Marlin.

As is gets a little warmer here in Cabo San Lucas, we see the inshore fishing heat up as well. March is the beginning of excellent Snapper and Grouper season, and the same goes for Swordfish. Striped Marlin fishing continues to be excellent, and we’ll still see a number of Wahoo, Dorado, Yellowfin, and more. March is a great time for either inshore or deep sea fishing in Cabo San Lucas. The weather in March is a little warmer than earlier in the year, with almost no chance of rain.

As we go into April, the offerings of the Sea of Cortez remain steady, with great opportunities to go after Striped Marlin, Swordfish, and inshore fish. Cabo San Lucas whale watching is also good during this month, as the Humpback and Gray Whale travel north. In April, expect great fishing weather, tons of Striped Marlin, and a wide variety of deep sea and inshore fish to choose from.

Cabo fishing in May:

May brings with it the beginning of Blue and Black Marlin season here in Cabo San Lucas, the Marlin capital of the world. At Picante, we’re all about these billfish, so book with us to have the ultimate Marlin fishing trip. We’ll also be seeing more of the striking Sailfish and continue to see plenty of swordfish and inshore fish.

Halfway through the year we start to see more from Dorado, and Wahoo. This is the last solid month for some of the inshore fish, as well as the Swordfish. Blue and Black Marlin fishing will be picking up this month, and we’ll still be having a good number of Striped Marlin. Cab San Lucas fishing in June is great thanks to the high level of diversity in the water during this time; many of our favorites are available this month.

During summer, Blue and Black Marlin fishing is at its peak. We also get a large number of Dorado and Yellowfin, making July a good month for targeting some of Cabo’s most popular fish. If you’re looking for incredible Marlin and Dorado fishing, give us a call so we can hook you up with one of our knowledgable captains.

During August you’ll have similar options as in July, with large numbers of Black and Blue Marlin, and a good amount of Striped Marlin in the water. Marlin fishing in Cabo is the best in the world, so this is a great time to come see what’s out here and experience the fight of these fish. During summer we also get some of the best Dorado, Red Snapper, and Rooster fishing. If you’re thinking of coming to Cabo San Lucas for a fishing trip, August is as good a time as any for top tier Marlin fishing, and other popular fish like Dorado.

Towards the end of summer, the billfish are large in number. We see an increase in numbers of Sailfish, and Yellowfin. September is a big month for Blue Marlin, as well as Black Marlin. Dorado remain a popular choice for this time of year. Fishing in Cabo San Lucas is good year round, and during September you can expect tons of options and great catch, as well as great weather.

October is tournament time in Cabo San Lucas, the “Marlin Capital of the World”, and it’s when a ton of trophy sized Black and Blue Marlin are pulled from the Sea of Cortez. This is a great time for Marlin enthusiasts to come down and get a piece of the action. At Picante, we know Marlin, and our captains are experts that can help you target and maximize your success on the water. Who knows, you might just reel in the catch of a lifetime!

As November rolls around, the fishing in Cabo San Lucas remains consistently excellent. This is the beginning of the hot season for Striped Marlin, but we also see a slowing for Black and Blue Marlin. November is when we see a lot of really great Dorado, Yellowfin Tuna, Mackerel, and Shark. November is a great time for family fishing trips, and Picante has the know how to make your charter a memorable experience.

Winter fishing in Cabo San Lucas is fantastic. We see very good numbers of Wahoo, Yellowfin Tuna, and Dorado. We’re also going to have plenty of Striped Marlin, which are available all year round, but are best from November through May. December is the one of the coolest months here in Cabo San Lucas, so if you’re looking for a cooler day on the water, this would be a great time to get down here.

As you can see, it’s always a good time to fish in Cabo! We have some of the best captains, crew, and the finest charter fleet anywhere. Give us call today, or get in touch so we can help you plan an unforgettable trip that you’ll be able to brag about. 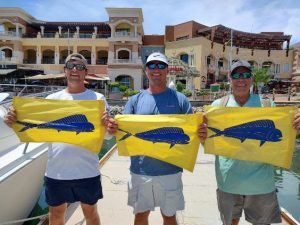