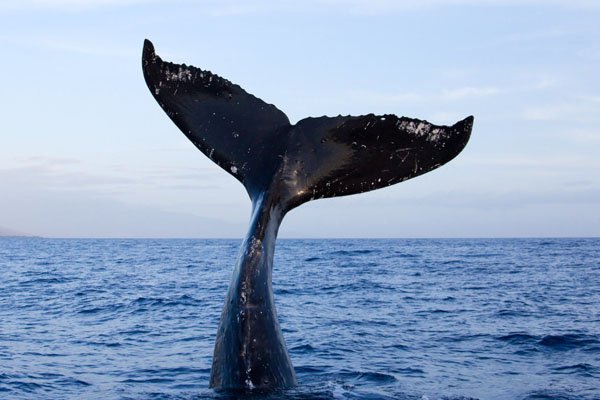 Whale watching is one of the most exciting things to do in Cabo San Lucas!

Our whale watching season begins in December, and goes through the spring. This is when the whales are migrating north from Antarctica. Gray Whales, Humpback Whales, and Bottlenose Dolphins are frequently spotted as they rest and feed in the waters off Los Cabos.

Whales can often be elusive, and require a keen eye to spot. Here are the main ways you’ll be able to spot whales and have a good time in Cabo San Lucas!

What to look for

You’ll be able to see them above the water as they move about. When they “breach” they leap up into the air, and flip back down making quite a splash in the process. It’s a spectacular sight, and Humpback one of the most likely whales to make a jump. No final consensus has been made about the reason for the whale’s behavior. Speculation that it is for communication, hunting, or cleaning themselves are some of the theories.

Another way to spot them is by looking for “lobtailing”. This is the action of tail-slapping the surface of the water, which causes a loud clap. This is common in the whales of Cabo San Lucas, as well as the dolphins here. Some evidence shows that, at least in Humpbacks, lobtailing is a means of stunning their prey to increase their chances of successful hunting.

Keep your eyes peeled for “logs” when you’re whale watching. Humpbacks are known to sleep close to the surface so they can sleep and breathe at the same time, without having to travel from the depths. All whales sleep with half of their brain at a time, while the other half is responsible for breathing. “Logging” can be identified when you spot a dorsal fin sticking out of the water, and not moving.

If a whale pops up above the surface vertically, it’s “spyhopping”. It happens when  they become curious about something and wants to check it out. They come out of the water like this so they can use their eyes (and ears, in the Gray Whale) to evaluate surface objects. They are known to skyhop to get a better look at whale watching boats, and if you’re lucky, they might hang out for a while.

Picante has knowledgable captains available to take you out for a day of incredible whale watching. Get in touch to book your trip today!