Last week the tournament season start and we are so proud to report Karma III won the release division and get $59,670 on their pocket.

This week it’s the famous tournament in Cabo the Black and Blue Tournament and we have Salsa, Pride, and Picante 45 & Karma III fighting to bring another prize all the good vibes to these teams.

We are very happy to report the Cabo San Lucas fishing continue improved greatly since my last report, the water is warmer, cleaner and we had some action days, and that’s a good news for the angler because the tournament season it’s here., it’s so nice to start seen every day more and more anglers arriving to the Land End and enjoin and fishing on this paradise.

At the Marina in Cabo San Lucas everything start been ready for the one of the most important tournaments in Cabo the Bisbee’s Black and Blue Tournament  and all the Cabo sportfishing companies are ready to fight for that millionaire award and of course we are ready to fight and bring that prize to Picante.

Dorado fishing in Cabo and Marlin fishing are good and our boat Dream a 35ft Flybridge boated 10 Dorados and Cisco a 35ft CABO Express released 1 Striped Marlin and 1 Sailfish by the gordo bank spot.

Make sure to check out our Boats on “SPECIAL” our most popular vessel Express a 32ft CABO Express and Cisco a 35ft CABO Express. Ready to book your own Cabo fishing trip? Picante Sportfishing has been providing quality fishing charters in Cabo since the 90’s. We’re known for having the best charter fleet around, as well as knowledgeable captains to help you make the most of your time on the water. Don’t risk your vacation or waste your time, give us a call or get in touch today.

October’s all about Marlin fishing, and there’s no better place to catch one than Cabo. In honor of this month, and of these great fish, we thought we’d give you a little background on the different types of Marlin that are available here in Cabo. Read on to learn more about their distinct characteristics, fighting style, and more.

The Blue Marlin is a powerful beast, averaging in the range of 11′ and between 200 and 400 pounds. They dive deep but tires quickly. Many experts experts believe that there are two distinct species of Blue Marlin those living in the Pacific, and those in the Atlantic. It should be mentioned that this point of view is highly contested, and not the majority’s opinion by any means.

Striped Marlin are found in the Pacific ocean, and are of course very plentiful in Cabo. If you’re looking for an action-packed Cabo fishing trip, Striped Marlin is what you should be after! They are known to put up a fight, and they don’t give up easily. Cabo sportfishing for Striped Marlin is some of the most fun you can have on the water.

Ready for Your Cabo Sportfishing Trip?

The Marlin fishing in Cabo is renowned throughout the world. Fishermen come to Cabo from all over the world for a chance to catch one of these bad boys. In fact, Bisbee’s Black and Blue tournament, one of the most prestigious fishing tournaments in the world, is also one of the more famous Marlin fishing gatherings, and takes place here in Cabo.

We think you’ll have a blast if you come in October, as the Marlin fishing peaks and takes center stage here in Cabo. Come experience the thrill of a lifetime, as many have before you, when you feel a Marlin at the tip of your rod.

Click here to get in touch with our sales team and book your Cabo sportfishing charter today!

Are you looking to have a good time? The months of October, November, and December mark the beginning of the holiday season a great time to experience Cabo San Lucas. If you’re looking for a fun weekend getaway, or a relaxing vacation with the family, you should definetely write these down in your calendar!. Here’s a list of some important upcoming fishing events, other events, and places to visit in Cabo.

Do you know of other interesting events going on in Cabo? We invite you to get in touch with us so we can add them to the calendar!- 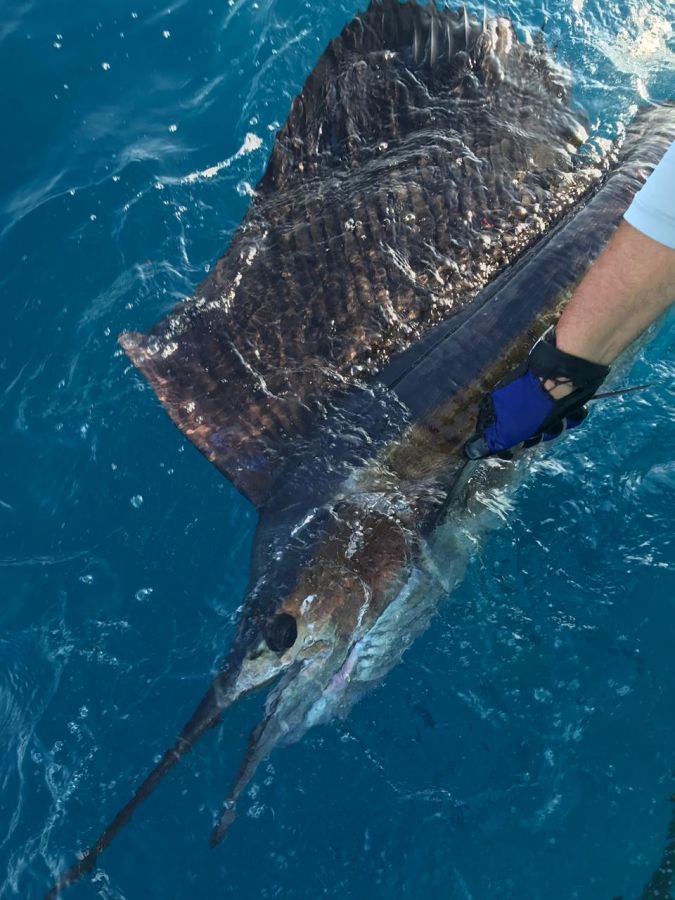 The offshore scene is becoming more consistent in Cabo San Lucas and the Sailfish, Blue Marlin and Striped Marlin bite should heat up along the Pacific side.

On this days our anglers experienced a phenomenal offshore in Los Cabos with multiple fishand we are hoping the bite keep up!

We’re very excited for the rest of the month, the tournament season are around the corner and we start with the LOS CABOS BILLFISH TOURNAMENT October 14th &ndash 18, 2018, then we continue with BISBEE’S LOS CABOS OFFSHORE October 18th – 21st, 2018, and then with the biggest tournament in Cabo San Lucas the BISBEE’S BLACK AND BLUE October 23rd – 27th, 2018.

On these past 3 days of October our Picante Fleet had a very good days Dream our 35ft Flybridge boated 4 Dorados and 1 Bonita and released 2 Striped Marlin, 1 Sailfish, 1 Shark, Salsa our 35ft CABO Express released 1 Sailfish

Make sure to check out our Boats on “SPECIAL” our most popular vessel Express a 32ft CABO Express and Cisco a 35ft CABO Express Ready to book your own Cabo fishing trip? Picante Sportfishing has been providing quality fishing charters in Cabo since the 90’s. We’re known for having the best charter fleet around, as well as knowledgeable captains to help you make the most of your time on the water. Don’t risk your vacation or waste your time, give us a call or get in touch today.